In his four years with the club Logan Hoffman has overseen the transformation of TFA Willamette from a small-town grassroots youth soccer organization into one fo the most well-respected clubs in the state of Oregon. He's been responsible for the development and implementation of curriculums and club standards that have helped to develop 43 collegiate players since 2017.

With the launch of the TFA Willamette U23 team Logan will oversee player identification and recruitment, player development initiatives, and enforcement of club standards.

Logan holds an NSCAA Premier Diploma and a USSF 'B' License, was named as a 2013 NSCAA 30-under-30 Award recipient, and has been published on 5 occasions in the NSCAA Soccer Journal. He has coached at every level and age group of the US Soccer pyramid from U5 through the professional ranks in the USL, including a previous stint as a Premier Development League (now League Two) head coach with the Springfield Demize.

Logan has also coached numerous youth and collegiate players who have developed into professionals now playing across the United States and Europe in the USL, MLS, Belgian Jupiler League, Norwegian Tippeligaen, League of Ireland, and the Finnish Premier League.

Prior to joining TFA Willamette, Logan spent 8 years coaching in the collegiate ranks spanning 4 different colleges including Oregon State University and a stint as the interim head coach at the University of New Hampshire. 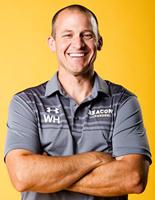 Head Coach Will Hander will lead the TFA Willamette U23 team into their inaugural season in USL League Two after an impressive opening campaign with the team in 2019. Competing in an exhibition season in preparation for a move to an established league, the TFA U23s posted a 6-4-0 record under Hander's watch, including a run to the final of the Oregon Open Cup.

Will also serves as the men's head coach at Northwest Christian University, a post he took over in December 2018. His extensive collegiate coaching background in the state of Oregon also includes stops as an assistant at Corban University and Linfield College, during which time he has coached numerous all-conference award winners.

As a player Will began his collegiate career at Cornell College before transferring to, and graduating from, Pacific University. He also spent time playing in the Premier Development League (now USL League Two) for the now defunct Cascade Surge.

Will has a degree in business management from Pacific University and holds a National Soccer Coaches Association of America (NSCAA) Advance National Diploma and a Level 1 Goalkeeping Diploma.