TFA Willamette utilizes an integrated club model that builds its foundation at the youngest age groups, and by utilizing standardized curriculums and implementing a club-wide style of play, provides a path of progression for all players from U5-U18. All of this feeds towards our College Bound programming, which works to give all of our players the tools and confidence to pursue a college education.

Little Tikes Soccer is one of the newest programs for TFA Willamette, and will launch in Winter 2018 through a partnership with Boys & Girls Club. Children at these young ages need a variety of different stimulus to help them develop both mentally and physically. Using proven methods in child development, Little Tikes uses soccer as a tool to help children develop fine & gross motor skills while gaining confidence, exploring their creativity, and having fun! INTERESTED? REGISTER HERE

In Spain, an Escola is a soccer “school” run by a local soccer club. It is a recreational program designed to prepare young players with the foundational skills to go on and play on older, competitive teams.

Escola students are introduced to the technical, tactical, physical and psychological skills necessary to become proficient as competitive soccer players. They are also taught the values of work ethic, competition, respect and teamwork.

TFA Willamette coaches use a player-centered, active-learning coaching style that utilizes games instead of drills and questioning instead of commands.

At TFA Willamette, the Escola is the beginning for local players from Albany, OR and the surrounding areas who have a goal of trying out for a competitive soccer team someday. 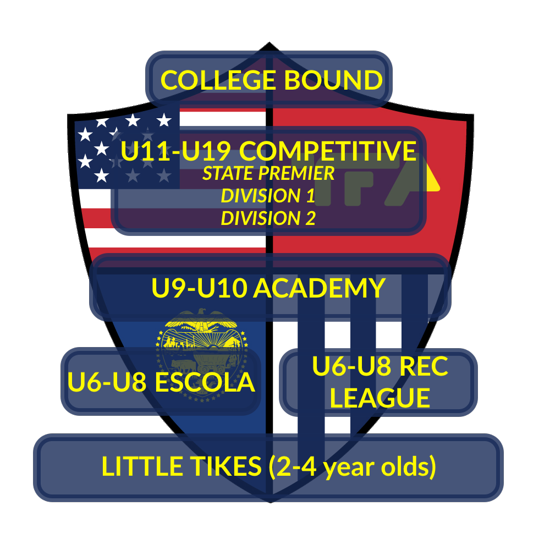 Our U6 & U8 Recreational Leagues will kick off in Fall 2016 and run both Fall (Sept.-Oct.) & Spring (April-May) seasons. Every seasons will include eight practices and eight games.

What sets our recreational league apart is that while we love to incorporate parent volunteers with a passion for the game, we do not require them. All of our practices and games are led by TFA staff coaches who are licensed by the United States Soccer Federation (USSF) and have undergone extensive training in our specialized TFA curriculum.

These recreational leagues will provide an additional opportunity for our young players to train and put their skills to the test in a fun & challenging game setting, while also working to bridge from our KidsKicks and Escola programs into our U9-U10 Pre-Competitive Academy.

The Escola & U6-U8 Recreational League curriculums are based upon Horst Wein’s Funiño format which was used by Barcelona’s academy coaches to develop their own curriculum. It uses a basic 3v3 game format which teaches players the basics of the TFA Way of "total futbol." This small-sided format provides young players with maximum playing time, touches on the ball, encouraging them to be creative and begins to develop game intelligence.

Our U9-U10 Pre-Competitive Academy is the next step for TFA Willamette players on their soccer journey. Players commit to playing two seasons over 8 months (Mid July-Mid Nov.; Feb.-May) with two practices a week and 8 games over the course of each season. Games are played in a regional league against other clubs from Corvallis, Eugene, Salem, and Bend to give our players their first experience against outside competition. The club may also arrange additional friendly games or tournament opportunities to increase this game exposure.

Our U9-U10 Academy players will also have the opportunity to train and play up through TFA Willamette's "Open Play" program to get a taste of what the next step of their soccer journey will be like.

With the step up from the U9-U10 Academy our players begin to see more competition and unique challenges. Our U11-U19 Competitive teams all compete at the state level through OYSA, and will also play in selected tournaments throughout the course of their 8-months of play.

Our U11-U14 Competitive teams play 8 months out of the year (Mid July-Mid Nov.; Feb.-May) including two full seasons with 2 practices per week, competition in State Cup or Presidents Cup, and additional tournaments or friendly games. Our "Open Play" program also gives these players the opportunity to train up to 4 days a week at no additional cost.

Due to the High School Season in the fall, our U15-U19 Competitive teams only play 6 months (Dec.-May) including one league season (January-April) and State Cup or President's Cup (April-May). Our high school teams will practice 2-3 days per week.

TFA Willamette will never promise any player a college soccer scholarship, or even a spot on a college roster for playing with our club. However, it is a strategic goal for TFA Willamette to provide the resources and support to every one of our players to help them develop the life skills and confidence needed to pursue and succeed in attaining a college education, whether soccer is involved or not.

As part of this strategic goal, TFA Willamette will provide the following support systems to players within the club: